In my practice as an executive coach in Montreal, I often hear managers complain about the stress of conducting business meetings.  Their major worry is conflict. 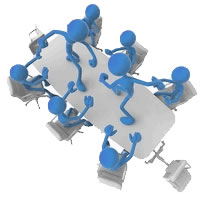 My first response is almost always: “you’re lucky, especially if those anticipated conflicts contain the seeds of contrarian ideas that might help the business.”  In today’s economic climate; heaven help the boss surrounded by sycophants!
However, our natural tendency is to shy away from conflict, fearing that if it is not contained, it could lead to bruised egos, perceived loss of authority and perhaps permanently strained relationships.

Here are some tips that might be helpful in dealing with conflict in productive ways.

#1 Clearly identify the issue.
As a leader, even a leader whose ideas are being opposed, take the initiative and clearly formulate the opposing view. If you are proposing incentives to a sales team and someone heatedly objects, hear them out and then take back the argument by re-stating their own objections. Do so clearly, but ensure that your re-phrasing adds an additional layer of conceptualization.

In our incentives example, someone might challenge the manager by claiming:
… but our salespeople aren’t monkeys working for peanuts in a circus.
After listening, you might respond by rephrasing their objection in this more generalized question:
That’s interesting. The question is, to what extent do we all respond to rewards?
In this way, by listening and then rephrasing at a more conceptual level, the heat is removed. In addition, you have taken back the control that the questioner may have intended to wrestle away from you.

#2 Get multiple views.
When conflict arises in a meeting, spread the discussion. Often, leaders react badly to challenging questions sensing an underlying threat to their authority and position. Often, the natural tendency is to argue it out with the proponent leaving everyone else as spectators to a prize fight.
Don’t make this mistake, involve others in the discussion. In this way, the potential for individual conflict with you, the leader, is reduced while you can benefit from other points of view. The only caveat is that you stay on-topic until resolution. Opening-up the discussion means increasing the range of speakers and opinions, not topics. If asides occur, gently bring the group back to the issue at a hand.

#3 Collect data.
Many of the senior executives that I coach work in industries where subjective judgment plays a considerable role. For example, predicting what style of dress is going to be a hit in the next season is not something likely to be generated from iterations of differential equations from econometrics.

As a result, many executives in the garment or fashion industry fear conflict since they know that, at the end of the day, all they have to back-up an opinion is their gut feeling.
In these cases, what I often suggest is taking a time-out to collect data. Again, after having clearly formulated the conflicting issue, ask the team if there are other sources of data that might resolve the issue. Sometimes, additional data can be obtained by asking other experts, or data-mining from past company records.  When feasible, the time-out could be longer to conduct a focus group or measure behaviour in a sample of store shoppers – anything that can shed light on the conflicting issue with something more than gut-feelings.

With these tricks at the ready, a manager can turn meeting conflict into a productive exercise.