Opponents were deliberately targeting my tennis backhand, and for good reason as the ball would either fly-off my too-open racquet, or alternatively, plummet into the net. In a last desperate effort before turning to racquet-ball, I engaged our club pro who coaches, not executives as I do, but weekend warriors with still lingering fantasies of ripping winners if not like Nadal, than perhaps like McEnroe, even the 2009 vintage McEnroe.

As a psychologist engaged in executive coaching, I like to entertain the fantasy that I do something special. I like to think that my training and professional development provide a certain uniqueness in how I intervene to improve performance or solve workplace problems. My illusions about uniqueness were quickly dispelled after an hour’s tennis lesson.

Firstly, I should introduce my pro, Konrad, whose young countenance appearing below should not divert you from his 10 years of competitive playing and now teaching experience. 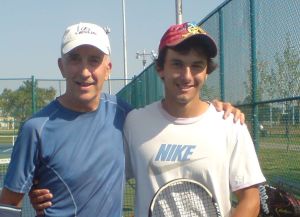 Konrad began with what I would call an assessment. Although he didn’t use these words, I would refer to the assessment as multi-modal, in other words, he used various perspectives to see my problem. He first asked about my backhand, inquiring about typical errors and what playing situations elicited those errors. He then performed what I would call a behavioural observation where he observed my backhand in action – action that varied with the pace, direction and spin of the balls that Konrad sent me.

I didn’t say anything, but what Konrad did in his assessment bears a great deal of similarity to how I perform an assessment with a business client. I first elicit a self-report of the problem, then, I often include some real world simulation that allows me to view the problem as close to the actual working situation as possible. In my assessment of leadership problems or anger management, I have a particular interest in determining the factors that improve or impair performance – my own equivalent of varying the speed, direction and spin of the ball.

After assessing my backhand, Konrad initiated the intervention stage by describing the playing context for the modified stroke that he was about to add to my repertoire. He described how the new two-handed top-spin backhand would help me in various game situations. In my own coaching work, I call this the coaching rationale where I describe how a new skill or competence can effectively readdress the workplace problem that is hampering my client. This first step in skill acquisition involves understanding how the new skill will bring results.

I won’t take you through all the remaining steps of the lessons except to mention these highlights; 1) Konrad’s demonstration of the required biomechanics, 2) my practicing of the new movements in progressively more difficult situations, and 3) the final linkage of the multiple motor components of the new backhand into an easily retrievable and unifying image. I won’t say anything except to highlight how a psychologist often uses modeling, shaping and imagery training as principle ingredients of executive coaching.

I will however tell you how he ended the training with relapse prevention. Although the phrase derives from work in addictions, the term’s applications should be used in all behavioural change interventions, especially coaching.

It’s a hard phase of coaching, because after working and succeeding in training a new skill, we are reluctant to even mention that things might not continue to be rosy moving forward. We fear that if we mention it, we might encourage it. Well, Konrad like all good coaches did not suffer from magical thinking and ended the lesson with his own version of relapse prevention talking about what emotional and procedural responses I might bring to bear when I revert to my old backhand form.

I left Konrad’s lesson with a better backhand. But, I also left with an appreciation that my executive coaching sessions bear a great deal of similarity with what a good tennis pro or probably any teacher or coach does on a routine basis.

I still retain the fantasy, however, that we psychologists invented it.