A better way of voting

A better way of voting

I recently consulted with a professional practice where four senior partners were selecting a managing partner. I suggested that the process of discussion might be more critical than the actual vote since the partners could benefit from a frank discussion about their relative strengths, deficiencies and workloads. I didn’t give much thought to the mechanism of the final vote, at least not until I read about a creative voting system devised by the late, Dr. Lester Dubins, Professor of Mathematics and Statistics, at UC Berkeley.

His article traced the history of voting systems that were designed to be fair, starting with the selection of new kings chosen in such a way that each candidate receives a fair shake to become regent.

For example, Herodotus recalls the legend that the Persian king Darius ascended to the throne because his horse was the first among all the candidates’ steads to neigh to the city walls.  A more dramatically voting system, as described in Irish legend, cited how O’Neill became king under an agreed-upon proclamation that “he who first touches Irish soil will be monarch.” As the ships approached shore; O’Neill drew his sword, chopped off his left hand and threw it on the beach before the others could disembark.

Perhaps, suggested Professor Dubins, we can do better.

In Dubin’s solution for the selection of a director or chairperson, each voter simultaneously submits a sealed bid assigned to each candidate. In it’s original form, the bid was the change in salary the voter agrees to accept if that candidate is selected. For favoured candidates, one would supposedly winning to take a pay cut to get a desired director, and for disfavoured candidates, one would have to be paid more to accept the outcome. However, in practice, the bid could be salary, equity, perks or simply virtual.

To preclude voters from just backing their own ambitions, each voter must bid on every candidate with the proviso that the sum of bids across candidates must be zero.

For example, consider the situation where four partners are voting for a managing partner including their own candidacy creating a 4 x 4 matrix.

Assume that partner 1, Pierre, does not particularly like candidate A and therefore wants an extra $10,000 to work under her. Pierre then writes +10,000 under Candidate A.   If Pierre is indifferent to candidate B, he might mark zero under her name. Continuing, if Pierre is slightly favourable about Candidate C but very bullish about his own candidacy, then Pierre might indicate that he would take a $3,000 pay cut to work with C but a $7000 cut to work if he were made managing partner. Thus, he would write -3000 under C and a -7000 under D.

To reinforce the rules; the bids can not be changed once submitted and as mentioned, each voter’s bid must sum across the row to zero.

The selection of the winner is simple: find the column whose sum is most negative, and make that candidate the managing partner.

Since each voter is free to set any bid that they desire thus and none can later claim to have been shortchanged in voting power. In short, the mechanism is fair. In contrast to the traditional, “first past the pole” vote, the acceptability of the final result is facilitated by having considered each partner’s likely satisfaction and dissatisfaction with all possible choices.   Satisfaction is influenced by a very meaningful metric- namely, what one would be willing to give-up to achieve the desired result.  More importantly, in Dubins’ method, no one loses a hand in the process! 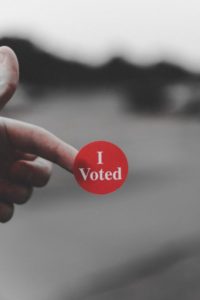